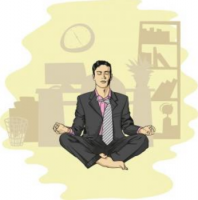 Google’s Gopi Kallayil On The Business Value Of Mindfulness

No reasonable person doubts that basic literacy is a fundamental business skill. After all, you won’t get far if you can’t read and write. So too with basic social and communication skills. But mindfulness? Is mindfulness—a practiced nonjudgmental in-the-moment awareness rooted in meditation, Buddhism and yoga—also becoming an important business tool?

Organizations like the Institute for Mindful Leadership and the Search Inside Yourself Leadership Institute say “yes,” as does the contemplation-centric Garrison Institute. They all assert a business value for mindfulness training while also providing such training. And they root the trainings they offer in traditional practices along with contemporary neuroscience and psychology. So too with business schools bringing mindfulness training into their curricula.

But not everyone is delighted by the prospect of mindfulness in the workplace. Some see it as “saffron-washing” and “abusing the Buddha,” well-intentioned efforts that sever mindfulness practice from the ethical frameworks in which such practice were developed and from which they derive meaning. Nevertheless, even the most ardent critics note mindfulness practices yield healthier, more productive employees. And emerging research backs up the value.

One of the leading voices encouraging mindfulness in the workplace has been Gopi Kallayil, Google’s Chief Evangelist for Brand Marketing. While they both hail from Google Gopi is not directly connected to the Search Inside Yourself Leadership Institute. He did tell me “(t)hey are doing a great service in taking the SIY program developed at Google and bringing it to the rest of the world through a non-profit.”

He and I exchanged emails about the business value of mindfulness. Readers of “Managing Mental Wealth,” especially those who have not yet gotten curious about whether mindfulness training might help in business, just might find helpful the stories and thoughts he shared with me.

He recounted a story whose beginning will be familiar to anyone who has done any public speaking. It’s the ending that’s unique and relevant.  After getting on stage in front of about 200 people at a Wisdom 2.0 conference breakout session on “Wisdom and Aging,” he pressed the clicker for his first slide. Yup, you guessed it. Nothing happened.

After many minutes of tinkering he felt the collective audience snicker: Even the Google guy can’t make his technology work for him.

When this happens to me I tend to hide behind self-deprecating humor and using my hands for a shadow puppet show. Maybe I mix in a little Borsht-Belt humor. But he called it an “American Bison moment.” To explain what he meant he told a story within this story:

“Once, in a very challenging work situation, a colleague at Google pulled a coin out of his pocket, a family heirloom from his grandfather, embossed with an image of the American bison. The bison is a denizen of mountains and valleys where snowstorms are swift and brutal. My colleague told us it’s the only animal that will turn toward the storm, lean into it and walk to meet it, which is why Native Americans call it ‘Faces the Storm.’ It knows instinctively that if it does this, it will be out of the storm sooner.

“Standing on stage, I decided to do the same. ‘Ladies and gentlemen,’ I said, ‘I came here to talk about the amazing technologies we build at Google. But the most important technology we use in our lives is right here–our body, our breath, our brain. Let me show you how we can use this technology most effectively when challenged by life’s problems. Let me teach you a small breathing and mindfulness technique I am using right now to manage this situation up here on the stage.’”

Instead of shadow puppets and bad jokes, he turned his techno-glitch into an in vivo demonstration of how to manage what he calls “our inner technology.” It was stress management live for when familiar technologies fail to perform creating unexpected problems without immediate solution. He said he told the audience “to breathe a little more slowly and deeply; to notice whatever was arising in their body and mind with no judgment. If it was a feeling of panic as I had a few moments ago, that was okay. I told them to lean into the feeling and walk toward it just as the bison do.” He said the audience loved it.

But this is more than an amusing anecdote that humanizes a hyper-successful Google-ite. It really illustrates a business value for mindfulness. It shows why companies like Google, as well as General Mills, Target, and Nike to name just a few, not only encourage but teach mindfulness.

I’ve written previously about how Google uses an in-house seminar called Search Inside Yourself (SIY) to bring mindfulness into their organization. Kallayil said this “curriculum includes secular elements of meditation, yoga, attention training, self-awareness practices and other contemplative practices. It encourages the view that the most important network we connect with is the inner one — tapping one’s own wisdom, one’s innate emotional intelligence, and that of our colleagues, as our most powerful resources for working through difficulties.”

Especially among those with a purely quantitative mindset, this might seem just a tad bit too New Age. And even if you’re open to the possibilities, you probably won’t deploy resources and make business decisions on the basis of a charming story about recovering from a techno-glitch at a conference, or even several such stories. You want data. Well, when it comes to mindfulness, the data is steadily accumulating. In the health sciences we know that contemplative practices like mediation and yoga increase well-being, support healthy stress responses, and facilitate personal growth and healing. Data is accumulating showing mindfulness benefits creativity, problem solving and performance at work and in educational settings. From inside Google, Kallayil  tells us “we’ve offered SIY trainings to Google employees for over two years now, and they tell us it’s changed their lives. It’s certainly helped make Google a more dynamic, and I believe, a more successful company.”

I was impressed by Kallayil’s generosity in noting that Google is but one example of the organizational benefits of contemplation, and SIY one example of how to develop contemplative skills and a culture of emotional intelligence. He also told me that “Search Inside Yourself is taking on a life of its own beyond Google, as SIY trainings are being offered in other settings to the general public.” In fact, he and his colleague  Mirabai Bush will lead such an SIY training in New York at the Garrison Institute in August. It is open to anyone. In fact, he hopes to teach individuals and other organizations “how to cultivate emotional intelligence, how not to panic or succumb to stress, but to face up, lean in, and work through tough problems.”

I very much agree with the final thoughts he shared:

“No matter who we are or where we work, we live in uncertain, disruptive times, with all the opportunities and difficulties that implies.  The only certainty is that there is no certainty in your work, your finances, your relationships or any part of your life. You may come face to face with a small irritant, a large problem, or even a full-scale catastrophe. When that happens, you can choose to be the bison. Turn toward the storm. Walk toward it. Walk through it.  And as the workplace mindfulness trend and trainings like SIY catch on, you’ll find more and more of your colleagues walking with you.”