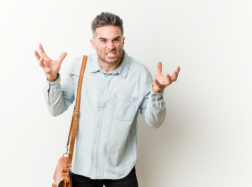 A question, people here sometimes echo, but only faintly so is “Among all the career opportunities offered here, will I find something that will lead me to success in conventional terms and yet be personally fulfilling and meaningful.” Sometimes, in strange ways and strange places, I stumble across people like us, who have beat their own path to the answer. I stumbled across Steve Mariotti, through a book my friend was reading. And the strange place happened to be an ‘ashram’ (Hindu monastery) in the Sierra Nevada foothills in California, where I sought refuge before coming to Wharton.

Steve Mariotti graduated from the University of Michigan’s school of business in 1977. He went to work for Ford Motor Company as a financial analyst, where his knack for International Finance won him the title “Stevie Wonder.” Soon he discovered that intramural politics was not his cup of tea. He moved to New York and started his own import-export firm. That was a revelation. Whereas at Ford he wallowed at the bottom of the hierarchy, he was now his own boss and that had an immediate beneficial effect on his self-esteem and outlook. He also learnt an important lesson about life in the big city. One day while jogging on the lower east side, a group of kids approached him and demanded ten dollars. They roughed him up and humiliated him. The experience was traumatic and the painful memories took on a life of their own. To confront his fears and find an outlet for his anger, he joined the New York City public school system and asked to be sent to the worst school in the system. His goal was to reform young people in these neighborhoods. They sent him to a neighborhood in the South Bronx that had earned the title “Fort Apache.”

His first experiences were worse than his mugging. His students were rowdy and he seemed powerless to stop it. One student actually set fire to the coat of another student. On another occasion, he was locked out of his class. Finally one day, he took his most disruptive students out to dinner, in order to figure out what the problem was. He learnt that they were bored with what he was teaching them. One fellow spoke up and mentioned that Mariotti had caught his attention when he had discussed his import-export business. The student actually rattled off various figures Mariotti had mentioned during class and concluded that his business was profitable. Mariotti was stunned to find such business acumen among students who were considered to be the worst in the public school system. He started sensing that something was wrong not only with his teaching, but also with the standard curriculum.

Then one day he lost complete control of his class. He sat in his chair and found something stick to his jacket. He got up, looked at his chair and saw a large wad of gum. The class roared. He tried to remain calm and started teaching a new subject, decimals. A radio suddenly blared from the back of the room. Two students began dancing at the front of the room. The rest of the class began to clap in unison. Someone shouted, “Look, Mariotti is having a nervous breakdown. You can’t control this class, Mariotti, because you don’t have juice.” All of a sudden he was hit in the eye with a spitball. A student grabbed the American flag off the wall and, holding it like a spear, mockingly poked at Mariotti with it. In exasperation, Mariotti walked out of the classroom and as he did so he was hit in the back with a wad of paper.

He wanted to walk out, call it quits and go back to running his company or do something more sane. After a minute, he realized that he could not do that. After he stepped into the hallway to regain his composure, he thought about the dinner with his students. They had said he was boring – except when he talked about business and money. He walked back into the classroom and, without a word started a mock sales pitch, selling his own watch. He explained the benefits of the watch, why they should buy it from him for six dollars, and sell it for higher to make a profit .The class listened in rapt attention. This incident, born out of desperation, inspired him to his real vocation – teaching entrepreneurship to inner city kids. Once he had their attention, he moved from a sales talk to a conventional arithmetic lesson; if you buy a watch at three dollars and sell it for six, you make three dollars of profit, or 100 percent. Without realizing it, he was teaching them business fundamentals of buy low, sell high and return on investments.

These young people had a natural aptitude for entrepreneurship because their challenging lives encouraged independence of spirit, toughness, and salesmanship. They were comfortable with risk and ambiguity .

He started teaching his students to run microbusinesses; like taking care of pets, selling T-shirts in flea markets, and cleaning houses. These businesses earned only a few hundred dollars a month, but this was a fortune in his students’ eyes. In addition, they benefited greatly from the hands-on experience of the economic system and the boost it gave to their self-esteem. Entrepreneurship training seemed to foster a sense of vision and personal responsibility for their future, even in these young people born into poverty and violence.

In 1988, Mariotti left the NY school system to start the National Foundation for Teaching Entrepreneurship. He is now the founder, president, and chief executive officer of NFTE, a non-profit institution, whose mission is to bring business and entrepreneurial skills to disadvantaged youth. The NFTE has shown over ten thousand young people how they can each start their own small business, and its programs are offered in fourteen cities across the United States.

Entrepreneurship, as taught by NFTE, has helped young people achieve financial independence and thus improve their lives and the economic lives of their neighborhood. NFTE now operates programs in fourteen American cities, and has licensed a program in Scotland. Future plans include programs in Europe and Africa. NFTE students have, on average, a business formation rate of about 10 percent and weekly sales of $60. By comparison, the adult African-American business formation rate is 1.5 percent, the Hispanic average is 1 percent, and the Caucasian-American rate is 6 percent. The empirical results of the NFTE programs – improved self-esteem, less teen pregnancy, lower dropout rate, business formation – are presently the subject of a long term study by Dr. Andrew Hahn of Brandeis University. NFTE also runs business camps at Wharton, Columbia, and other colleges.

One day Mariotti, ran into his former student who had poked him with the flag on that fateful day when everything changed. This kid had graduated from high school which he credited to his interest in entrepreneurship. He had become very good at Math and could now do spreadsheets even better than Mariotti. After graduation, he had got a job as an assistant manager at a flea market, married and was raising a family. And most important he had excellent self-esteem. Ten years ago this could very well have been his mugger.

We expect priests and teachers, artists and naturalists, to care for and celebrate the human spirit. Should we not expect the same from CEOs?